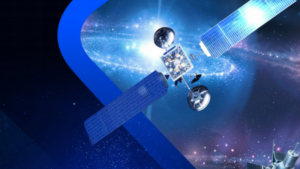 SovereignSky has successfully started to upload its BEOS hybrid blockchain to its primary satellite constellation (joining SpaceChain in space). It is currently in space orbit because of a partnership with SpaceQuest – launched in December 2018 onboard Elon Musk’s SpaceX. The purpose: to enable a ‘One World, One Network’.

“The project is so all-encompassing, it has taken some of the smartest, most visionary minds in blockchain, aerospace, mobile technology, and even science fiction to achieve its grand vision,” says Stan Larimer – co-founder of RUON AI, BEOS, SovereignSky, Steemit, and Bitshares.

Within a decade, ending extreme world poverty may be possible. One part of this could involve a new, encrypted Wi-Fi network which connects everyone on Earth.

A near indestructible blockchain financial system and global currency would then exist – with the attractions that it should be invulnerable to the effects of:

The concept came from SovereignSky/RUON AI Founder Timothy E. Burke’s sci-fi space opera ‘Planet X’. Yet, what started as a movie premise on a hypervelocity star system far away, is becoming a reality in Earth’s own solar system with the creation of:

RUON AI (pronounced ‘Are-you-on’), with a single patent application, believes its RUON AI solution can scan news sites, blogs, forums, chat rooms and social channels to identify users endangered or affected by war, famine or oncoming natural disasters. The AI creates a database of endangered users. It sends their profiles to HNWs, companies, donors and members of the public who can instantly send electronic currency donations (via SovereignAid and RUON electronic currency) directly to the users before the danger strikes.

SovereignSky and RUON AI’s next task is to work with global charities, international agencies, UHNW, VCs, the UN and Fortune 500 companies to distribute SovereignSky’s ‘connectivity boxes’. These contain:

SovereignAid and RUON electronic currency will then be beamed from donors up to the satellite constellation and directly to places and people in need in economically developing nations and areas without banking or even wi-fi (connecting directing to the portable modems distributed in these areas):

Any user holding a SovereignSky or RUON smartphone will automatically be able to receive a donation to their RUON wallet and can instantly spend the donation on clothes, water, food and medicine using the smart card. Donors can:

The beneficiary and donor can even show and track how each donation is spent – via videos, pictures, two-way chat and even double-verification blockchain accounting technology. the result has the potential to be a transparent donation process.

Tim Burke, RUON AI founder, says, “The beneficiaries receive donations instantly and can upload photos and videos showing your money being put to good effect. People in need can personally thank donors through the RUON app, and donors can monitor exactly how their donations have been spent. All of this is made possible via blockchain technology, auditing and reporting. We feel it’s one of the most effective and trusted donation and verification processes ever created, and, today, this solution has been officially captured in one of RUON’s patent pending claims. It’s time for change. Please contact us and help support our mission.”

SovereignSky is a satellite constellation powering its own space-based blockchain. This blockchain is currently uploaded three times daily by SpaceQuest onto SovereignSky’s first satellites – AprizeSat-5 and THEA.

“We are excited to work with SovereignSky on its incredible mission to help eradicate global poverty, and we are on the way to complete one of the first ever blockchain transactions in space onboard the SovereignSky satellite network,” says Dino Lorenzini, CEO of SpaceQuest.

The United States alone donates US$390B per annum to charity (globally it is US$800B). Such numbers indicate how feasible eradicating extreme world poverty is.

The SovereignSky concept of space-based wifi, blockchain, AI and cryptocurrency donations/payments requires some imagination, and faith. Yet, for a positive start to 2020, believing feels better than doubting.

NB: for a video on the concept see Youtube