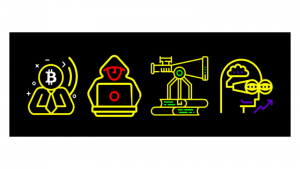 nobl (sic) Insurance’s research has come up with predictions for 2020 and beyond, based on current developments in the world of digital currency. These include the assertions that 10% of people will be cryptocurrency owners by 2020, that 20% of US millennials will hold cryptocurrency by 2021 and, by 2030, 70% of US citizens will own cryptocurrency.

Greg Wixted, Chief Innovation Officer at nobl commented: “Our accurate telephone based research predicts that crypto ownership in the U.S. will top the 25 million mark by the end of 2020, meaning that 1 in 10 Americans will be crypto owners. This is significant because scientists at the Rensselaer Polytechnic Institute in New York have discovered that when just 10% of the population holds an unshakable belief, this belief will always be adopted by the majority of society.

“So, we believe this will be the most exciting year for crypto yet, the year where we finally reach the tipping point that leads to mass adoption of crypto currency.”

Crypto mass adoption is round the corner

nobl argues that crypto ownership is skyrocketing. It points to research sources which come to the conclusion that ownership of crypto currencies is accelerating in the US. Finder, an Australian-owned comparison site, predicts that the number of American crypto holders has almost doubled, from 7.95% in 2018 to 14.4% in 2019, an increase of 81% in just 12 months. YouGov, the online pollster, supports this with a figure of 14.5%.

In support of these arguments nobl commissioned telephone-based research. This suggests crypto ownership in the US will top 25M people by the end of 2020. This means that 1 in 10 Americans will be crypto owners. If the work at Rensselaer is correct – when 10% of the population holds a firmly held belief, this belief will spread until it is adopted by the majority of society. This implication that nobl advances is that 10% is the magical level when crypto moves to mass adoption.

The importance of millennial acceptance

For American millennials, some 15M US citizens in this age group will be crypro owners. 15M represents 20% of all millenials and they have interest because payment with crypto is spreading. Charities and retail businesses are all joining the ‘crypto revolution’:

Stablecoin may be the game changer

According to nobl, stablecoin may ultimately provide a road map to more widespread adoption – because it offers:

Nobl supports this by saying: “the banking industry has accepted that digital currencies are here to stay”. As evidence, it points to the finance sector investing in both cryptocurrency and blockchain start-ups:

Acceptance by 2030 will mirror that of credit cards

The levels of adoption of cryptocurrencies will equal that of credit cards today – which have reached 70% of all Americans. Nobl implies that at this level there will be the digitisation of a whole raft of major economic activities, including the US dollar.

Usage will transform. The key, per nobl, will be the development of a killer crypto app, the equivalent of Gmail or Uber. This could be a new kind of browser or an evolution of the hot wallet. For nobl, the crypto industry will inevitably produce a game changer which will promote acceptance.

In 2019 the US e-commerce market is worth almost US$600B. There are already some 30 crypto-enabled debit cards available. Such availability will make easier than ever for people and businesses to spend their cryptocurrency online and in the real world.

The key ‘conclusion’ for nobl is that – if crypto can cash in on even a paltry 1% of the US e-commerce market, this would represent nearly US$6B worth of transactions. nobl regards this as a conservative estimate. It believes that by 2030 at least 30% of all transactions will be blockchain-based. With low fees and instant execution, consumers will convince themselves of the advantages. The effect of this is that the blockchain sector will expand and expand throughout the next decade.

So much innovation inevitably will bring risks. In such circumstances it is only a matter of time before those risks become real. This may have a dampening effect of crypto acceptance – at least for Enterprise Times.

Perhaps the key factor with which to consider so much crypto bullishness (or bull?) is to remember – nobl Insurance is … an insurance company. As it puts it “if the worst to happen is your exchange being hacked and you suffering a loss, noblCRYPTO will be there to pick up the pieces“.

You might almost argue that broad-based cryptocurrency acceptance is what nobl needs for its business to grow.