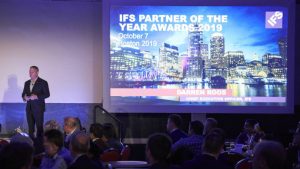 The IFS world conference kicked off with a its partner day. The culmination was a charity dinner raising money for the reforged IFS Foundation with the support of an auction. IFS also announced and presented its partner awards for 2019 during the evening. Darren Roos opened the evening by introducing Stephen Keys, President APAC, Middle East and Africa and the executive sponsor of the CSR program at IFS.

Roos previously worked with keys at Software AG. To lure him from his role as CEO at FTSGroup he promised Roos the additional responsibility of CSR. Keys is passionate about giving back and appears to have uplifted the CSR initiative at IFS by several notches and has some big ambitions.

An evolution of CSR

Keys has invigorated the existing IFS CSR program which consisted of three key components. One are that IFS invests in is education. Nearly a third of its workforce is located in Sri Lank. It supports students through their degree education by paying the university fees and offering them a part time role in the organisation during the five year period they take to complete the normally three year course.

For IFS, this helps individuals who might not otherwise have been able to afford the degree. It also provides it with some talented individuals who may then be offered a full time role when they complete the course. The company also helps social enterprises with the donation of software to support their organisations. Finally, it now enables employees to take one volunteer day a year to support local non-profit organisations. This was based on the call for organisations to observe the UN volunteer day (which is 2019 will be December 5th).

When Keys joined the company he found that in addition to the above, employees also spent time raising money for charity. However, these efforts were often ad hoc and could only raise enough to service an issue. He wanted to think bigger and asked: “If we channel to one cause can we fix a root cause.” That cause would be to “Help break the poverty cycle in remote Sri Lanka”.

The new initiative that Keys started is to help a village in Sri Lanka out of poverty. The village of Welusumanapura is 3 hours north of Columbo. It has a population of 3,000 people living in 700 homes. The IFS program aims to help the village through a number of actions. Keys will believes this requires an investment of $200,000 dollars a year over a 5 year period. This is not just to fix a single problem but to provide the village with a sustainable future.

It will achieve this through improvements to health prospects. The first step provides fresh water and sanitation to those household who do not have it and the farms that struggle to irrigate their subsistence farms. IFS will then introduce new work to the village through the acquisition of hand looms and husking machines. This will provide jobs for the current and future generations.

Once these are complete, it will focus on the improving the surrounding infrastructure for the village. It hopes that this will be a model for future projects in other villages. Problems are sometimes unexpected. On a visit to a hospital Keys asked the administrator what he wanted most. The hospital had no refrigeration to store medicines and no defibrillator. The answer he got was: “Can you build a wall”. Every night buffalo would come into the hospital compound and every morning staff would spend an hour cleaning away the dung.

What makes this initiative different is that Keys gave an impassioned appeal to the channel partners to join in with the initiative. He spoke about four ways that they could do this.

Engage: Lean in, listen to what we are doing

Connect: Keys spoke about how help has come from different avenues leveraging the connections that people have. One organisation donated kitchen equipment. Another, a footwear manufacturer, had donated 500 pairs of shoes.

Donate: In the same way that IFS and its employees will donate to this cause he hoped that partners would too. Keys added: “I like the idea of this being our foundation”.

The message resonated well with the audience. Enterprise Times discussed some of the benefits with Tom Constantine, co-founder of Anthesis, an IFS partner. He commented: “It is empowering for us as a partner that is actually strategic and we can see it can make a big difference. To be part of a bigger project rather than work on something (smaller) that can cost as much to set up.”

He added that it could also become a differentiator for employing people. Younger consultants are asking about whether the company gives back. Becoming part of something larger, with visible results could make a difference.

The program is in its early days and Keys needs to formalise and document some of the new ideas that he is having, especially around the involvement of partners. However, many software vendors focus on internally supported programs. With its extended ecosystem, IFS could have a significant impact on this and other villages. It will need to ensure that the improvements are sustainable. Its aim is to increase the level of education. However, it also needs to ensure that there is a new generation of farmers to take over the land and keep the villages sustainable rather than have a generation leave for university and find jobs elsewhere.

The evening was a success with thousands raised for charity at the auction and the event raised an (estimated) $60,000. Surprisingly some lots were not sold though.

Merlin Knott, Head of Channels, IFS who presented the awards commented: “The IFS Partner of the Year Awards highlight not only the remarkable work that partners are delivering to our customers across the world, but their strong commitment and dedication to a thriving, successful partner program.”

Other organisations involve partners and customers in their CSR programs, notably NetSuite and Tableau. However, this initiative by IFS appears to go further in its vision, at least to date. By focussing the whole organisation on a single project it brings the entire company together in a single cause. It also helps IFS win even more friends in Sri Lanka as it is not just a major employer but also helping the wider community. It is a fact that goes down well with the Sri Lankan employees judging by the audience reaction at the event.

While there are risks with this approach it is one that will help IFS to become an employer of choice. It should be noted that the changes wrought by Keys at the global level have not stopped the local initiatives by employees. However, it seems that most of the charitable giving by IFS will go to the foundation rather than support local initiatives. One course commented that it still needs to work out the details.

The RISE and Flow with IFS