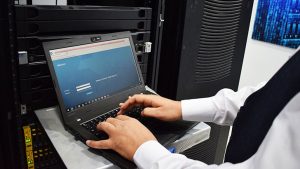 After a six month delay, Eric Holcomb, Governor of the State of Indiana has signed a bill that gives data centers significant tax breaks. The bill, IN HB1405 provides exemption from Indiana sales tax for up to 50 years. This applies to all IT compute and networking equipment and software required to run the data center. It also exempts power consumption and power generating equipment such as generators.

In 2018, over US $120 billion was spent on data centers worldwide. Indiana hopes that this bill will help it compete with Chicago, IL and attract Microsoft, Google, Amazon and others to the state.

One organisation that is set to gain substantially is Digital Crossroads. It is building a US$ 40 million data center at Hammond, Indiana. Peter Feldman, chief executive officer of Digital Crossroads commented: “Indiana is on the leading edge of the digital economy and is already attracting substantial investment from data centers and numerous and large technology companies.

“By providing exemptions on sales tax for equipment, information technology hardware, software and infrastructure as well as electricity, Gov. Holcomb is helping to ensure businesses like Digital Crossroads, and all their potential customers, achieve their full potential.”

Do all data centers benefit from HB1405?

No. To qualify for the state sales and use tax exemption there has to be a minimum qualified investment within five years. This must range from at least $25,000,000 to more than $150,000,000 depending on the population of the county in which the data center is located. It is also aimed at the regeneration of former industrial sites not greenfield builds.

The majority of large data centre builds are focused on the campus model. This allows the owner to buy land and put up multiple data centers over time to meet demand. This will make HB1405 attractive to many of these data centers builders. It allows them to spread their investment over time with guaranteed tax breaks as they build new facilities.

The bill also requires that the average salary for all staff employed in the operation of the data center must be at least 125% of the county average in which the data center is located. This is an interesting move. It is intended to ensure that companies do not target Indiana in order to get cheap labour.

2018 was a record year for building data centers. As companies increase their use of cloud computing, 2019 and 2020 are likely to be just as busy. Hyperscale data centers are at the core of the build out. There is only so much capacity that can be absorbed by the market.

At the moment, vendors such as IBM and Google say that just 20% of the corporate data workloads are in the cloud. That implies that there is a huge amount of data and compute yet to be moved. Some see that as a green light to keep building.

However, there are other issues that have to be thought through. Will all that workload end up in cloud data centers? What about privacy and data sovereignty? The latter means that operators are looking to build more data centers in-country. It is not just countries applying data controls. US states are following GDPR and enacting their own data privacy laws which could mean controls over where data is stored.

There are also questions over power generation. While Indiana has exempted sales tax for electricity consumption, it has not offered breaks for those facilities that are using renewable power only. Across the US, there is a considerable build out of wind and solar power and the data center industry is rushing to take advantage. It is surprising that this isn’t part of the tax breaks in this bill.

It will be interesting to see how other US states react. Are we about to see a race to the bottom in terms of tax breaks across the data center market?