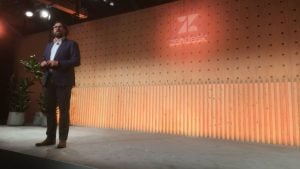 At Zendesk Showcase in London, Mikkel Svane, Zendesk’s Founder and CEO announced on stage several enhancements to the Zendesk solutions. Zendesk is a powerful customer engagement platform that has powered 2 billion interactions between its customers and their clients according to Svane. They have delivered engagements with around 778 million different customers. That is a five times increase from five years before. As those numbers increase so are the customers evolving. Svane commented: “We are all working really hard to keep up with customer expectation, not just in support but across the whole organisation.”

One change that Svane noted is the speed at which customers expect to be served. He cited Starbucks as an example where people (in theory) no longer have to queue as they can order their coffee on an App. He added that Costa, in order to keep up, launched its own app to deliver a similar service.

Even that bar has been raised though. In China Svane noted coffee is now delivered to a work desk within 18 minutes of ordering. He added: “The concept of waiting and waiting in line is slowly being eradicated. What we consider as exceptional in customer service today will become mundane tomorrow.”

To support these changing expectations Zendesk launched an expansion of its answer bot across all web and mobile channels. This AI powered chatbot can provide answers to users for a growing percentage of queries. Importantly, it delivers self service at a time when customers want to find answers now, and not when a help desk opens. As well as enhancing the Answer Bot it also announced improvements to Guide Enterprise knowledge management. Other announcements included multi-party messaging and a new Agent Workspace which is re-imagined UI.

The Answer Bot is now available via API, Web Widget and Mobile SDKs, as well as email and web forms. This means that service centres can reduce the amount of time agents need to fulfil mundane tasks. The key improvements announced on stage was a new Answer Bot web widget and an Answer Bot for Slack.

Adrian McDermott, president of products, Zendesk commented: “Customers today demand fast responses in a context that suits them, and AI can be used to help companies be more timely and accurate when engaging with customers. With Answer Bot, we’re putting an end to laborious processes to resolve simple questions. We’re not just delivering self-service everywhere – we’re delivering AI-powered self-service everywhere, which will continue to make for a better customer experience.”

Answer Bot is powered by the knowledge contained in the Zendesk knowledge base, Guide Enterprise. Customers have potentially improved the knowledge base by adding articles onto it. Those articles were access 3.9 billion times in 2018. To enhance its effectiveness Zendesk has added several tools. The first, demonstrated on stage at Showcase London was Content Cues. Content cues can deliver at least three separate insights to administrators:

To assist with the administration, content managers can take advantage of Article Events. There are alarms that will prompt the content manager to review documents at a specific date. They can also set a scheduled publishing date and expiry date for articles. Thus, for example, if an FAQ about a monthly special offer is generated, this can be expired and archived once the end date has passed.

Zendesk has also introduced a richer search environment. Customers can improve the search criteria of articles with support for flexible Hierarchies, multiple theme templates and some enhancements to search.

A new UI is approaching

Also demonstrated was the next generation of the Zendesk UI. Delivered every six years the Agent Workspace will roll out during 2019 and be fully available in 2020. It allows users to have threaded sets of conversations and jump between them in a single space. No longer will agents have to switch between screens.

There is also a new omnichannel composer that enables multi party messaging. With the advent of new business models it will enable multipoint rather than traditional two way conversations. Thus a restaurant will be able to hold conversations between the delivery driver, the client and the restaurant staff to process any changes to the order.

This example prompted probably the most memorable quote of the day from McDermot who, when introducing the example above, cited the reason why this was so important:

“Hell hath no fury like a millennial without guacamole!”

The example demonstrated being a millennial that had missing guacamole from their delivery order.

Warren Levitan, VP Conversation Business and ex CEO of Smooch took to the stage briefly. Smooch, a recent acquisition has been a long term partner of Zendesk and through the acquisition will retain its independence as a conversational platform but will also help power the Zendesk customer experience.

As Levitan noted : “We are trying to help connect your customers using the messaging apps they use.” Expect more integration in the future. Smooch already powers the conversations for more than 4000 brands, by no means all Zendesk customers.

The Showcase keynote was a whirlwind of product, both existing new and future. It was impressive. Product updates came thick and fast. The announcement around Duet was also covered as Zendesk aims to deliver a joint offering for Service and Sales. Further Showcases are planned around the world but London seems to have had a pick of announcements.