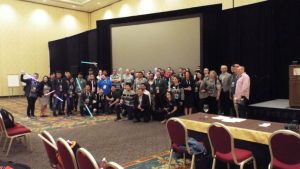 SuiteWorld 2019 is the major event for the NetSuite community for the year. It is held at the Sands Expo centre in Las Vegas. This year it started on Sunday 31st March with a day of training. It was followed on Monday with the partner day and the annual Hackathon.

The event is organised by the Oracle NetSuite Social Impact team and there were 88 participants. This was much better than last year. They were trying to solve the challenges posed by two non-profit organisations. The delegates were a diverse set of participants including employees, partners and customers. As with last year, the attendees were around 20% female. This reflects the make up of the wider industry, rather than the overall population.

The participants divided themselves into seventeen separate teams, and were split into two groups to solve the challenges posed by the two charities: Eight for Mana Nutrition and nine aiming to solve the Art in Actions problems.

The aim of Mana Nutrition is to end childhood deaths due to malnutrition. There are still 17 million children with severe acute malnutrition across the world.

In 2011 it opened a factory to produce RUTF. RUTF is a formula developed by nutritionists in Africa to take a child from near death to health in a 6 week course of 3 packets of the formula per day. The food does not need to be refrigerated or taken with water. It contains 500 calories of vital nutrition and minerals and primarily consists of peanuts and powdered milk. Attendees were impressed by a video clip from a 60 minutes program that demonstrated its effectiveness.

Five significant aid organisations use RUTF and distribute it across the globe. They include: Unicef, USAID, World food, Save the children and World vision. Mana Nutrition is one of a small number of manufacturers of the formula and is based in Georgia, US, the heart of peanut growing country.

It needs to improve its production quality controls to further reduce costs and become more efficient. It already produces 425,000 packets per day and operates the factory around the clock for five days a week.

While its failure rate is low, it believes that it could further reduce this. It takes a sample of 10 packets and inspects them manually for faults every thirty minutes. This process is slow and it needs to speed up both the process and its reporting so that it can identify and resolve any production problems quickly. Chris Whitfield, Chief Finance Officer at Mana Nutrition explained the reason behind the challenge saying: “This is driven by the clients request that we look hard at process control around production to give them confidence, so they know the product is traceable.”

Founded in 1982 by teacher Judy Sleeth, Art in Action aims to deliver visual art education in areas where it has been cut out of the curriculum due mainly to cost. Mizgon Darby, Executive Director at Art in Action explained how art has helped education and how the non-profit now delivers art lesson packs to 85,000 student across 32 states. She believes that the mission is even more important today as art helps to develop creativity in pupils. This is a trait that organisations are increasingly looking for during recruitment. The packs include all the materials required by teachers. They are sent to participating schools to deliver lessons that engage with pupils of all learning styles. The lessons are focused on a range of subjects including maths, science and culture, as well as art, through the medium of art.

The non-profit has only ten staff. Its implementation of NetSuite has helped to lower its administration costs and helped it scale,. It has doubled its outreach in the last year. However, it still has operational issues it needs to solve to reach its ambitious targets.

Mizgon shared with Enterprise Times that by the end of the fiscal year 2021 it hopes to reach 150,000 students. With the problems solved, Mizgon believes that within five years it should reach 300,000 with operations in every state. She also shared that it may expand internationally. Art in Action has received interest in its scheme from abroad, but is still considering the challenges that presents.

It posed several challenges to the participants including the ability to track whether its stock was donated or purchased. It also needs to accurately predict the actual cost of replenishment. This is because some stock is entered at zero value and some at the purchase price. It also wants to improve reporting to doner organisations to demonstrate the impact that they are delivering for the non-profit.

Once complete the teams present their solutions to judges. They include representatives from both NetSuite and the two non-profits. Teams are judged on the basis of four criteria:

In the end Troy Hickerson of Mana Nutrition declared its winner saying: “A huge thanks, you have no idea of the knowledge and ideas that you have given us, one winner Manafestation”

He later spoke to Enterprise Times adding: “This team most elegantly wrapped the new process around our current process”. The winning solution delivered a slick user interface for the collection of the quality and introduced an integration with Google Charts to deliver the result visually so that they could be acted on quickly.

For Art in Action, Christian Edoria, Director of Finance and Operations, one of the judges and responsible for its NetSuite implementation was also impressed. Edoria commented: “You opened up my eyes to a lot of possibilities especially on the integration side. One winner HEART4ART.”

Edoria also spoke to Enterprise Times giving four reasons for the choice. He stated: “They were able to do it the best. They had the solution work flow. They were able to show a proper demo. They hit all the challenges that we wanted from the get go.”

The winner solved the problem of zero value stock by using the returns functionality within NetSuite to bring in donated stock. This was one of the most elegant ways of solving that challenge.

An honourable mention should also be given to The bay area wolf pack and IHeartMana who were the disappointed finalists.

This year the challenges posed by both non-profit organisations challenged the Hackathon attendees with operational rather than finance issues. They both had missions that people saw value in supporting. As in previous years, the winners are both the non-profits and the participants. The latter spent twelve hours working to solve a problem, making new friends, learning new skills and helping two laudable activities. Both non-profits commented that they had learnt a lot during the event.

The Oracle NetSuite Social Impact team has several Buildathons planned for the coming year in cities across the globe. NetSuite employees, partners and customers will therefore have their own chance to help others. This year the customers represented 60 participants and partners 27. There was only a single NetSuite employee who entered the Hackathons, testament to its success.

The Hackathon is just one of the ways that the Social Impact team is involved in this years SuiteWorld. There is a Social Impact track for the first time and the main charity supported during the event is the American Cancer Society. NetSuite is asking attendees to pledge on social media using the hashtags hashtags #AttackingCancer and #SuiteWorld19. For 2,000 pledges, NetSuite will also donate $10,000 to the American Cancer Society.

The Hackathon is a great way to start the conference ahead of the main keynotes and sessions over the next three days. With several announcement planned for the next few days expect a flurry of interesting news from Oracle NetSuite.