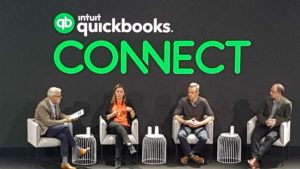 QuickBooks kicked off its UK conference this year with a half day event for its Accounting and Bookkeeping partners. Most of the major announcements will be on the second day. Alicia Skubick, Marketing Director kicked off the event and introduced the opening keynote. The session was divided into three sections.

First up a panel of MTD experts delivered their update on how MTD is going, answering questions from the audience. Alex David then gave a brief overview what QuickBooks is doing to make adopting MTD easier for both accountants and their clients. Finally Paul Shrimpling MD Remarkable Practice interviewed Peter Jarman, managing partner of PJCO. It was the UK finalist for the Intuit Firm of the Future in 2018.

Jarman told his story of how three years ago at QuickBooks Connect he decided that his firm would embrace cloud. He employed an accounting graduate to investigate and then implement QuickBooks across his customer base. The firm now only supports clients that use QuickBooks. It has seen an increase in revenues by delivering more services to those clients as he helps them improve their businesses.

Making Tax Digital – where is HMRC?

The panel consisted of:

Shrimpling introduced a session that was informative and delivered several points of view. Sheehan gave the HMRC viewpoint. She confirmed that the take up of MTD has accelerated with more than 1,000 signing up every day. HMRC is now confident that it is successfully  testing at scale. Importantly, she informed the audience that during the initial 12 months the fines that HRMC could levy are unlikely to be applied if organisations at least attempt to upload their VAT returns.

Sheehan added that HRMC would have a “light touch” on those fines. Those who do not attempt to modernise their systems however would probably face fines. She also gave a warning that the failure to upload the data was different from the payment of VAT to HMRC. Payment was still possible even if the supporting documents could not be uploaded. MTD could not be used as an excuse for not making the payments in a timely fashion.

She also said that HRMC would not roll out other taxes until VAT was proven. Any further roll out, such as corporation tax was likely to have a 12 week consultation period. In some cases it may also need legislation passing. In order to initiate that process, it would probably be announced in a Spring or Autumn statement first.

What about the Accountant perspective?

Lodder has worked with Intuit over the last few months to test the MTD solution that QuickBooks provide. He acknowledged that it was sometimes challenging but added: “Where we are now is everything is working smoothly. For us it opened up so many doors.”

Those doors were opened as a result of the publicity that HRMC has given to MTD. However, the conversation normally focuses on cloud accounting solutions such as QBO (QuickBooks Online) and its benefits, rather than MTD itself. Lodder strongly believes that accountants should see MTD as an opportunity that does not come around often to change the conversation with clients.

There were some lessons learnt that others could learn from though. The first was the opportunity that MTD creates. The second was that accountants should look to manage the process carefully. They should track, using CRM or their practise management software, which clients had signed up and which have not. This is not just about those clients for whom the work was already done, but potentially audit clients who may not be prepared for the changes.

The panel also acknowledged that digital finance systems do not cater for every circumstance. It is why QuickBooks has created a bridging platform. This allows users to access and use spreadsheet templates to upload data for companies that do not fit a standard VAT return.

Sheehan acknowledged that where as originally spreadsheets were, and still are frowned upon they are a necessity at the moment to deal with complex VAT returns, including Flat rate. Davies confirmed that the bridging platform would support flat rate VAT returns by the go live date. Sheehan expressed the desire to see spreadsheets phased out by HMRC but indicated that as yet there is no timescale for doing so.

Alex Davies then revealed the five steps that QuickBooks has focused on to make MTD simple for both accountants and their customers. Davies believes that Intuit has listened to its partners and understands that MTD is more than just choosing the right software.

The first day of QuickBooks Connect was well attended by Accountants and Bookkeepers. Day two beckons with announcements promised for the UK market. This first day was not as intense as last year. It seemed a missed opportunity to really deliver some training and other information specifically to the accountant audience.

What the first day did deliver was the opportunity to network, a very informative keynote on MTD and the time for attendees to have good conversations with the many exhibiting ISV’s that are attending the event this year.