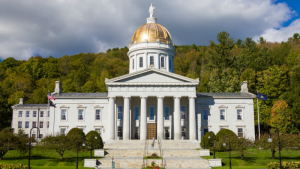 The Vermont Department of Financial Regulation and Secretary of State are collaborating on a captive insurance blockchain pilot. The Secretary of State, Jim Condos, and Department of Financial Regulation Commissioner, Michael Pieciak, signed a memorandum of understanding outlining their collaborative efforts to explore emerging blockchain technology and its use in the digital recordkeeping practices of the captive insurance industry.

“Developments in technology provide opportunities for government to improve efficiency and transparency, cut red tape, and improve services for Vermonters,” said Secretary Condos. “This pilot will allow us to examine whether or not the application of blockchain technology for digital recordkeeping can improve aspects of the state regulatory process.“

Vermont is a leader in captive insurance when measured by premiums written. It is third in the world by numbers of active licenses. The Vermont pilot program aims to help the state identify areas where the use of blockchain technology in regulatory and other government business can:

The Secretary of State’s Office and Department of Financial Regulation jointly issued a Request for Information (RFI) on January 10, 2019. Their purpose is to:

The State intends this pilot:

“Financial services firms are innovating at lightning speed and regulators have an obligation to keep up,” said Commissioner Pieciak. “This partnership with the Secretary of State provides a great opportunity for our teams to become better acquainted with distributed ledger technology and understand how the state and Vermont businesses might benefit.“

Blockchain, or digital ledger technology, can create transparent and validated records of transactions while providing increased efficiency, accuracy, and security for users. It has the potential to compare favourably with traditional record keeping methods. Vermont’s investigation of blockchain seeks to identify significant benefits – such as more efficient administration – while maximizing taxpayer value for Vermont’s citizens.

Enterprise Times likes the nature of Vermont’s initiative. It possesses focus and relevance to a specific activity (captive insurance) yet does not commit to blockchain before basic facts become known.

Latest News Steve Brooks - March 4, 2021 0
Cleo continues to target the logistics sector, and its partnership with CTSI-Global is a major example of this. A few weeks ago, it announced...