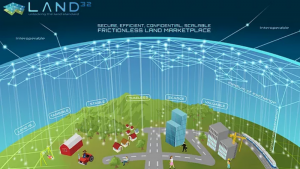 Land32 wishes to turn units of land, whether publicly or privately owned, into a medium of exchange, in effect creating a self-sustaining marketplace for land financing and investment. Ir proposes to this based on the Toda.Network, which launched in 2018 as a mechanism for enterprises to exploit the promises of the blockchain.

“I have spent the better part of my career in real estate investment and consequently, have come to hold a great understanding of land and its importance; it is one of the most vital natural resources and one of the few assets on this planet that consistently appreciates in value. Despite this, it is not seamlessly integrated into the financial markets,” said Daniel Saliba, CEO of Land32.

“Land is a great store of value, it is tangible, indestructible, scarce and finite. When tokenized, it becomes a great and stable medium of exchange, and in the long run, it could be a good unit of account. Yet at present, so much land is simply not utilized at all, and when it is not utilized, its value is not realized in any form.”

Canada is the second largest country in the world by land mass. 89% of Canada’s land is owned by the Crown (aka the Government) on behalf of Canadians as a whole. That does not mean the Crown’s massive land assets are used optimally utilised.

Meanwhile, Canada also has a foreign debt of over US$1T.  Potentially, or arguably, the Crown’s land assets – if monetised via a cryptographic representation – might be worth more than US$8T (a figure roughly comparable to all the gold ever mined).

According to Mr Saliba: “We’re going to start by doing something as simple as linking a square centimeter of land into TODA’s data structure, making its value more easy to transact with. This is currently empowering land owners and real estate developers to efficiently raise financing cost-effectively, enabling individuals to seamlessly invest in land and ensuring necessary regulatory requirements can be met.”

The blockchain connection and Land32 approach

Land32 proposes to establish an immutable record of land and its ownership. Its rationale is that owners – private, business or government – can have proof of ownership of a piece of land. Furthermore, it does not matters large or small piece of land is, or where it is located.

For a project such as Land32, blockchain technology opens up possibilities. Blockchains are immutable. They become the public record.

Land32 will create and digitally:

By creating these units, the underlying land asset becomes fungible (transferable and exchangeable). In doing this Land32 hopes to establish a secure marketplace for land exchange. With such a market, owners can unlock the inherent value of the underlying land asset. In turn, landowners – whether farm owners or real estate developers or private individuals or local and central governments – can benefit from non-traditional methods of financing – because the finance sector can obtain a security against a loan (for example).

Because Land32 builds on the Toda.Network blockchain, it will be possible to exchange a cryptographic representation of land for another asset (like cash, with a sale, or a loan backed by a proven security). The theory is that these approaches, which could apply to other products or services, optimise transfers and/or exchanges using assets which today are under or not utilised.

Toda.Network has formed, and continues to form, alliances as well as supporting startups and joint ventures. The Land32 is the latest participant on the Toda.Network.

The TODA Protocol is a network protocol and modification of TCP/IP which enables value management and transfer over the packet layer and below the operating system. It achieves this in a decentralized setting without reliance on a ledger. This means the Toda.Network can enable businesses and blockchains to scale as the numbers increase. The TODA Protocol is permissionless. In theory, anyone can build on it.

According to Toda.Networks own test data, it can support 1 tps for 800 devices dispersed geographically in a permissionless, decentralized form. Toda.Network argues that this is equivalent to c 1M tps for 800M user devices. It asserts the only cost is that of the network itself, with no leakage to a third party or to a different class of users and in an environment with no miners, no cloud, no database and no servers.

Toda.Network says its focus is security first, with efficiency, confidentiality, scalability and enabling P2P interoperability without third parties following close behind. However, the ‘catch’ lies in the fact that “leveraging Toda.Network’s ‘know-how’ is available only to projects with significant potential” – by either licensing or creating a strategic alliance with Toda.Network. Toda.Network chooses who it will work with, which may not appeal to many.

More broadly, the Land32 concept is of far greater interest. The notion of creating small divisions of a previously unusable asset could become interesting to many businesses, whether as lenders or borrowers. Imagine you could raise a loan based on your vegetable patch. Or, perhaps, the Italian Government could solve its financial problems by borrowing  against Italy’s art assets. How would you fancy lending against 2cm2 of Botticelli’s Primavera or 2cm3 of Michelangelo’s Davide?