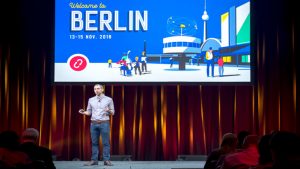 The change of name is important. Bryce reeled off a number of statistics from the 2018 OpenStack User Survey Report that all pointed to the same thing. Open is what is important. Organisations want Open because it gives them flexibility and reduces the risk of vendor lock-in. There is still some work to do before that becomes a guarantee.

The challenge is in the difference between community software and vendor curated versions. Despite the best efforts of everyone, they do diverge. Enterprise customers want stability and support and that is what the curated open source projects deliver. Community versions tend to be much more on the edge. They require a higher level of technical skills at the end user level and a willingness to do more work to make the software work.

OpenStack focused on multi-cloud and interoperability

Interoperability, unsurprisingly, was high on the agenda of OpenStack customers. They see open source as protecting them from vendor lock-in. For that to have a long-term viability, it means that open source projects must support each other. They must work across multiple platforms. Look at the various cloud platforms from Microsoft to Google, AWS to the different OpenStack distributions and interoperability is a key part of most developments.

OpenStack has found an interesting dynamic across these different views. It has end users who download and deploy the software themselves for their private cloud. Others go to vendors who will provide them a curated version, also for private cloud usage. In addition, there is an increasing number of public cloud options that use OpenStack. According to Bryce, this amounts to over 75 public cloud data centres around the world.

This gives  OpenStack an interesting position from a multi-cloud perspective. Users get the same platform in all three places and that means that moving their workloads across clouds is less painful than if they were using a mix of different underlying clouds. This is important when it comes to a multi-cloud deployment. Migrating workloads is difficult although the increasing dominance of containers and orchestration with Kubernetes is making it easier.

The question is how quickly can OpenStack take advantage of this and build a lead over other cloud platforms. When talking about a lead this is only in terms of market position. Irrespective of the cloud platform, it will still need to ensure that customers can integrate any cloud they want into a multi-cloud deployment.

Simpler implementation is always a customer request. In general, software has been getting better at that. Cloud, in particular, has changed implementation from complex projects with large amount of custom code to a question of configuration. This helps companies get up and running quickly. It also enables scale out to meet demand.

Integration has always been a major challenge for the software industry. The arrival of APIs has allowed many to put the pressure back on customers to write their own integration to competitors or niche projects. With open source, integration is part of the ethos of the software. Most successful open source projects spawn multiple clones and distributions. To ensure that everything is smooth for the end user, the community spends a lot of time making sure that integration just works.

That said, there is still a lot of work to be done. 75 percent of those responding to the 2018 OpenStack User Survey Report called these out as things to address.

Innovate faster but is there a cost?

Bryce was not the only one to surprise the audience. Nick Barcet, senior director, OpenStack Product Management, Red Hat threw a curve ball from the stage. OpenStack has successfully delivered a new version every six months for several years. The latest release, Rocky, has over 70,000 changes. That’s a massive engineering challenge and one that exceeds most software from major vendors.

Barcet told the audience that he wanted to see the six months reduced to three. He went on to suggest that this was not about telling end users that they had to increase their pace of deployment. For many corporate customers that would be a quick way to move them away from OpenStack. Instead, Barcet said that the community had proven that customers could jump several versions without any real problems.

This raises many questions, some of which Barcet addressed in a podcast with Enterprise Times that will air at a later date. Among these are security and stability. Most IT departments know that running multiple versions of software creates problems internally. This is not just about problems with patching but also about compatibility and the problems of feature mismatch.

Cloud has been good for the industry. It has increased the speed of software delivery, mainly through continuous integration and continuous delivery (CI/CD). It fits the DevOps models that organisations are adopting. The challenge will be whether Barcet’s view can be squared with that. He believe it can but only time will tell.

The move to Open Infrastructure

Given the prevalence of Software Defined everything, this seems to be a good move, but how will it work in practice? We already have a number of software defined projects from storage to networking, data centres to mainframes. The question is how will OpenStack be the glue to bring all of these together?

Anyone who has been around OpenStack for any length of time will know just how much software defined there is. It has supported dozens of projects over the last five years but are they all ready for the big time? It’s a question that Bryce will need to address at the next Summit in the US. It will certainly mean a complete rethink of the relationship between hardware and software. This is something that has been coming for some time. But can it happen fast enough?

We put that question to Barcet who believes that it will take up to two years for Open Infrastructure to settle down and be as stable as OpenStack is today. That’s a big gap at a time when cloud is accelerating. Will it allow the hardware vendors to hijack the agenda? Can they counter and retain their place in the order of things? Both are good questions that will remain unanswered for some time. The smart players will almost certainly go all in on Open Infrastructure so expect big announcements from the likes of Google, Amazon, Microsoft and OpenStack distributors.

Keynotes are rarely thought provoking. They are an opportunity to show the latest, shiniest, products from a vendor or community. In this case Bryce blindsided a lot of people with the name change and the shift of focus. He was ably assisted by Barcet who came on stage a little later. Between the two of them they offered a new direction for OpenStack and the whole community.

It’s an interesting future with so many unanswered questions. If this was a single vendor conference it would have alarm bells ringing. But this is an open source conference with the attendees all bought into the community aspect. That makes a difference. Listening to conversations in the Marketplace between attendees there was a lot of positive talk about this. Many seemed to be curious about how Open Infrastructure would change the focus of everything. It’s something that will take some explaining.

For now, the message is positive, focused on what the enterprise wants to hear and that it always a good thing.