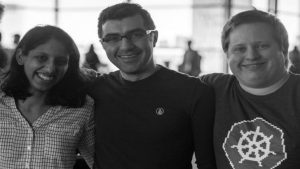 One of the big challenges for blockchain developers is the lack of tools to help them get started. Enter a team of developers from IBM. They took part in a hackathon sponsored by Cloud Foundry and the result was the Blockhead Service Broker. When you look closely at it and talk to the development team it is a moment of clarity that makes perfect sense.

Enterprise Times sat down with Morgan Bauer, Swetha Repakula, and Nima Kaviani. All three are Open Source Contributors, something that they take very seriously.

Many blockchain developers don’t understand the various steps required to bring up a blockchain node. Even when they get past that, they had to understand how to deploy things like smart contracts. Beyond that, if they want their app to be portable, they have to understand different blockchain implementations.

All of this is inhibiting the development of blockchain applications. Yet this isn’t the first time this kind of problem has occurred. Every major storage and connectivity technology has created a similar problem. In the 1980’s and 1990’s it was about networks and network drivers. In the 2000’s it was connecting to mobile networks and using Bluetooth as a carrier.

This team has delivered an elegant solution to the problem that draws on the solutions of the past. They have used the 12 Factor web applications model and simply plugged blockchain in as a service.

Simply is perhaps an understatement. The team had to overcome incompatible models between blockchain and cloud. They also had to find a solution that worked across very different blockchain implementations without impacting the security or the privacy.

There is some clever work here and more to be done. However this is a significant step forward for blockchain developers.

To hear what Bauer, Repakula, and Kaviani had to say, listen to the podcast