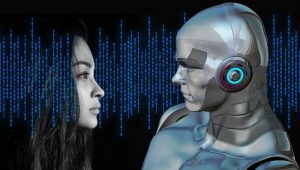 Amid the wealth of announcements that Salesforce has made this week the latest is possibly the most exciting but also the most frustrating. Salesforce has announced that Einstein will find its voice. Einstein Voice will bring a verbal conversational interface to the Salesforce platform. It announced two products Einstein Voice Assistant (EVA) and Einstein Voice Bots (EVB). The frustrating element is that EVA will only become available in pilot in the Winter 2019 release and EVB in the Summer 2019 release. There is no detail of when it will become generally available yet.

Is voice interface the future everywhere?

What Salesforce is promising though is a new conversational CRM. This utopia is where a Sales rep need only talk to the Salesforce Mobile App or smart speaker to perform taks they would once have done by typing. Parker Harries, Co-Founder and CTO, Salesforce commented: “We’re in the midst of an incredible technological shift, where the power of voice is fundamentally changing the way we work. Einstein Voice will usher in a new era of conversational CRM, delivering new levels of productivity and redefining customer experiences with voice technology.”

Voice interfaces are a reality but they are not without problems. A good typing speed of 55 words per minute is well surpassed by the average speaker saying around 150 words per minute. Considering many typists fail to reach 55 it should mean that productivity is increased three fold. The issue is whether the system understands and interprets the voice successfully. This becomes a huge challenge when faced by regional dialects and background noise.

A recent article highlighted that, one in five U.S. adults have smart speakers in their homes, they are of varying quality though. Capgemini predicts that by 2021, 40 percent of consumers will use voice technology over apps and websites to do a wide range of activities. With Salesforce deploying Einstein Voice, that is a percentage that is easily possible. How well it will work in all circumstances though is not yet known. People need the right microphone, a sophisticated speech to text engine and an AI that can interpret the difference between commands and comments, especially when updating information.

Salesforce has been building towards this technological leap forward. Einstein already delivers more than three million predictions every day. It is constantly learning and the next few months will see it become even smarter.

Einstein Voice Assistant will deliver a verbal conversational UI to Salesforce users. There are three specific areas targeted during the initial roll out:

As no one has yet provided the world with a generally intelligent AI, the new Einstein Bots will leverage the existing bot architecture and knowledge but allow for voice interaction. The advantages are clear for call centres especially. A voice bot can front end service calls, collect much of the information before handing off to a smaller team of experts to complete the calls.

Salesforce are making it easier for companies to deliver these focus solutions with Einstein Voice Bots. They will be able to customised their bots. These bots can be created for specific environments where a knowledge base is available. Customers can program the workflows that the bots will follow using clicks rather than custom code. This reduces the need for developers and increases the flexibility of the bots should requirements or processes change.

While Salesforce added that users can “Brand voice bots to your company”. This seems less about branding and more about customisation specific to a company. However, customers are able to build their own bots using the Einstein Bot Platform. They are able to integrate these to both Amazon Alexa and Google Assistant. The absence of Siri from this list is notable. Apple updated Siri in its latest iOS release (iOS 12). Perhaps that is one of the announcements yet to come at Dreamforce.

This is a long awaited but expected announcement from Salesforce and is the logical next step for UI. That Salesforce is now close to succeeding is positive. It will demonstrate Einstein Voice in the Einstein Keynote on Wednesday, September 26, 12:00 PM PT in Moscone North. Winter 19 is due in only a few short weeks. The initial feedback from pilots should determine how successful EVA will be in this iteration. Whatever its success next month, it is only a matter of time though before the full benefits of voice interaction with your business software is a reality.

What this will mean is that Salesforce CRM will become far more accessible. It may not mean the death of the keyboard but it is a step closer. Some users will be very happy if they can remove it from their desk and daily life.