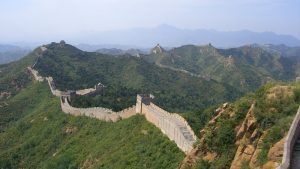 At the end of May, according to CNBC, President Xi Jinping of China waded into the cryptocurrency/blockchain debate. His analysis has much to commend it, and yet should induce fears – if his vision takes blockchain to one ultimate place.

CNBC has President Xi, in translation, saying “A new generation of technology represented by artificial intelligence, quantum information, mobile communications, internet of things and blockchain is accelerating breakthrough applications. … Since entering the 21st century, global science and technological innovation has entered into an unprecedented period of intensive activity.

“A new round of scientific and industrial revolution is reconstructing the global innovation map and reshaping the global economic structure.”

Despite the dominance of Chinese as the miners of Bitcoin, the Chinese establishment hates cryptocurrencies. Its reasoning is simple. The people who like cryptocurrencies tend to be distrustful of governments. The attraction of cryptocurrencies is anonymity. The Chinese state, as currently in power, hates anything which aids secrecy, except for itself.

In addition, though likely not a major factor, the sheer scale of electricity consumption to feed the Bitcoin mining habit, and many other cryptocurrencies, will have given the Chinese government ‘food for thought’. While trivial in the context of overall Chinese power consumption, the marginal cost and effect is substantial. Diverted to more constructive uses, that same power could produce more good than realising the occasional Bitcoin.

Indeed, over the past five years, the attitude to cryptocurrencies has evolved, from:

By banning cryptocurrency trading, the Chinese Government authorities hoped to:

What President Xi likes is … the blockchain

As Mr Trump frequently trumpets, China wants to innovate in areas where it can obtain some form of strategic advantage. These include, inter ali, 5G, AI … and blockchain.

Though no one can be sure precisely how blockchains will apply, among the ones where China sees advantage are:

Why does President Xi like these sorts of applications? Because they can track what happens. If the Chinese state can ‘peer into’ what its citizens and businesses are doing at the transaction level it hardens its already mighty control. Rremember that the Great Firewall of China is a mechanism to ‘protect’ Chinese citizens from all the evils and temptations they might learn elsewhere – like wanting choice.

Axios also describes how “The PBoC is working on a ‘Central Bank Digital Currency’, an effort to move China — already largely cashless in big cities — even further away from traditional currency. … This currency would allow the PBoC to track transactions. “But it’s not like a credit card where a lot of different parties have access to the data,” says Martin Chorzempa of the Peterson Institute of International Economics. “This would limit the traceability to certain individuals,” meaning the government.”

That China likes blockchain is not in doubt. It is throwing official resources behind blockchain developments as well as encouraging businesses to invest and innovate. President Xi’s hope is China will outdo others, both within China and as an external point of leverage.

The comparison to telecomms, and especially 4G and 5G cellular networks, is instructive. China sees these as having strategic value, beyond communications and manufacturing. They deal with data. That data is valuable to the state. Blockchain technologies (and AI) possess the same attractions.

The challenge of the rest of the world will be to out-innovate China (prevention, as usual, is a lost cause). This demands investment in realistic blockchain initiatives, and an admission that unregulated Bitcoin/cryptocurrency investing – however principled the anonymity objectives – are little more than a waste of energy in the pursuit of fool’s gold.