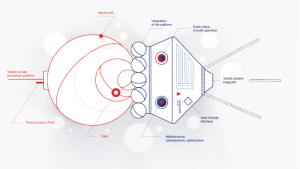 Vostok claims it will transform the digital infrastructure of any large organisation into a transparent, trustless and decentralised network while still delivering control of data and 10K tps performance.

Sasha Ivanov, CEO and founder of the Vostok and Waves Platform, said: “Vostok is a multi-purpose solution, quite simple, but at the same time non-trivial – no one has done that yet. It really is a game-changer for the adoption of blockchain technology as it will allow any large organisation to gain the benefits of blockchain without having to create new systems from scratch or retrain their staff. There has been plenty of talk about the potential of blockchain, but there has been little in the way of technology that businesses and governments could actually quickly start using.”

Vostok is a private blockchain platform and system integrator. Its objective is to enable public institutions and large enterprises anywhere in the world to enhance their existing systems with blockchain technology. (This does assume there is such a need.) According to Vostok these organisations will be able to improve the security, data storage, transparency and stability of their systems.

The stimulus for Vostok came in response to “scores of requests” from large organisations and government agencies for a blockchain-based platform on which any project is implementable – from a highly secure and reliable registry to e-voting or distribution of benefits. If true, Vostok will represent a significant encouragement for the adoption of blockchain technology – because it is a universal platform which can integrate with existing systems as used by enterprises and large organisations worldwide.

Typical example where Vostok says uses may occur include:

Nomenclature and some technical detail

Vostok was the name of the craft that carried Yuri Gagarin into space. It claims to be faster and cheaper than existing blockchain solutions, handling 10,000 transactions per second (TPS) at a cost of only $0.000001 per transaction.

This compares to Bitcoin which:

Vostok uses a secure, closed operational node set with Proof-of-Stake. Its private blockchain platform leverages blockchain technology. According to Vostok: “It runs on the principles inspired by public blockchains but represents a transition between permissioned systems and fully open decentralized ledgers… Vostok blockchain implements Waves-NG, a next-generation technology and consensus algorithm designed and based on the Bitcoin-NG proposal by Cornell Computer Science Researchers Emin Gun Sirer and Ittay Eyal. This increases the effective bandwidth and speed of block creation which is especially significant for business and public administration needs, because it allows for conducting microtransactions securely and without delays.

“The private blockchain is enabled by native crypto-tokens (Vostok System Tokens). Possession of VSTs is imperative for the network consensus algorithm (Proof-of-Stake), as it unlocks access to certain network features.

“Vostok network is maintained by nodes distributed worldwide, with access granted and regulated by a centralized committee. The network architecture offers the possibility to assign certain features to particular nodes located in different jurisdictions. Moreover, it becomes possible to create and maintain fully closed networks with controllable access which are fully-supported by the main network. (The) permissioned nature of the network guarantees immutability, provides access control, and allows for high transaction speed through the optimization of network algorithms for the permissioned set-up.”

Yet another high performance all-dancing blockchain solution arrives (whether on paper or not is unclear). The Vostok web site has a section favourably comparing its own performance with comparing Bitcoin, Ethereum, Ripple, Bitcoin Cash, Litecoin and Stellar. There is no mention of Gospel Technology or Billon or Zilliqa or toda-Algorand.

What is common, so far, to all these ‘high performance, high transaction rate’ blockchains is the lack of customer proof that they deliver. No doubt one will one day deliver that. On the meagre details provided by Vostok one would have to be an enterprise, or organisation, as brave as Gagarin in 1963 to ‘bet the business’.