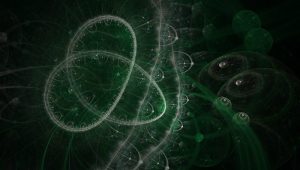 There is a real fear that quantum computing will upset the cryptographic basis of current blockchains; a quantum blockchain would remove that. In a paper from Del Rajan and Matt Visser from the School of Mathematics and Statistics, Victoria University of Wellington in New Zealand they examine a solution.

“Our method involves encoding the blockchain into a temporal GHZ (Greenberger–Horne–Zeilinger) state of photons that do not simultaneously coexist. It is shown that the entanglement in time, as opposed to an entanglement in space, provides the crucial quantum advantage. All the subcomponents of this system have already been shown to be experimentally realized. Perhaps more shockingly, our encoding procedure can be interpreted as non-classically influencing the past; hence this decentralized quantum blockchain can be viewed as a quantum networked time machine.”

The problem for conventional cryptography

Cryptography is the basis for current blockchains. Without cryptography, blockchains lose many of their most attractive attributes – including assurance that nohing has changed.

Public key cryptography underpins most online communications and most current blockchain technology. This exploits a pair of keys to encrypt information:

Today the best public key cryptography systems mean a traditional computer must calculate the factors which comprise the keys. Thus far the complexity exceeds their ability to do this in much less than some billions of years.

Quantum computing takes advantage of quantum bits (qubits). Enterprise Times will not delve further into the technicalities) but the implication is that, with quantum computing, it becomes possible to break public key cryptography. (Google and IBM , and others, are working on quantum computing.)

What do Rajan and Visser add?

In their own words: “For an analysis of the quantum benefit, we look primarily at the blockchain’s ability to be rendered tamper proof. With just a spatial GHZ state, the measurement correlations of these states are stronger than what a classical system could ever produce. In this spatial entanglement case, if an attacker tries to tamper with any photon, the full blockchain would be invalidated immediately; this already provides a benefit over the classical case where only the future blocks of the tampered block are invalidated. The temporal GHZ blockchain adds a far greater benefit in that the attacker cannot even attempt to access the previous photons since they no longer exist. They can at best try to tamper with the last remaining photon, which would invalidate the full state.

“Hence in this application of quantum information, we see that the entanglement in time provides a far greater security benefit than an entanglement in space. The temporal GHZ state involves an entanglement between photons that do not share simultaneous coexistence, yet they share non-classical measurement correlations. This temporal non-locality, between two entangled photons that existed at different times, was interpreted in as follows: “…measuring the last photon affects the physical description of the first photon in the past, before it has even been measured. Thus, the “spooky action” is steering the system’s past”.

“Stated more shockingly, in our quantum blockchain, we can interpret our encoding procedure as linking the current records in a block, not to a record of the past, but linking it to the actual record in the past, which does not exist anymore.”

If it is a fact that blockchain concepts, never mind implementations, are stunningly complex to comprehend, then adding a quantum dimension makes the head spin – unless you are a quantum mathematician. This makes deriving practical conclusions difficult. That said there are some obvious points to make:

There is a tricky chicken and egg situation here. It would be preferable if models for unbreakable quantum cryptography arrive before quantum computers. The demand for a quantum blockchain to use entanglement in time has many attractions.