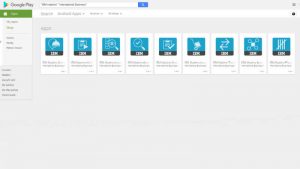 IBM has released the Maximo Anywhere apps  onto the Google Play store. This is the long awaited release for Android that IBM first announced when they released the iOS version in summer last year.

IBM has made it easier for clients with BYO devices. It enables staff to download the apps from the Google store. Once they have downloaded the app they only need to point it to the MobileFirst server. Updates are automatically pushed by the server to the device so users do not need to reconnect to the Play Store again to download the latest release. Further instructions are available in the blog post.

In total nine IBM Maximo apps are available on the Google Play store providing a range of functionality. The apps available are:

Most of the features available on Apple devices are supported. However, there are several that are not:

For companies that need functionality such as offline maps it is still possible for them to build their own applications. This is possible using the traditional build process to create the APK files. These would need distributing from the Mobile First server though

Rolling out Maximo Android apps via the Mobile First server was time consuming and prone to error. Releasing them to the Google Play Store, makes it easier for users to download and start working themselves without technical assistance. This small update is a wise move and should help companies using Maximo to get further engagement and use from the mobile apps. In turn this will increase efficiency.