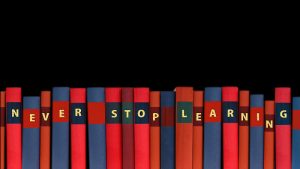 You’ve finished opening your presents but no one bought you a book. This blog provide a list of books from industry leaders that Enterprise Times has interviewed in 2017. The question that we asked was “What was the latest business book you read, your favourite book or podcast?” Most replied with a book, but we have included other mediums where highlighted.

Only one book:  Maverick by Ricardo Semler was mentioned more than once. In total there are 21 books below that you might considering downloading during the break.

So who chose what?

Don Mal, CEO Vena Solutions said “Crossing the Chasm“, by Geoffrey Moore. He explained why. “We as a business last year were looking to cross that chasm to reach that early majority. That one I would say would be most relevant in our own business evolution.”

Tod Nielsen, CEO of FinancialForce answered: Thank You for Being Late by Thomas Friedman. His reason: “He makes this premise that the computer industry as we know it today didn’t really start until 2007. His premise is founded on Moore’s law which the industry has been living under Moore’s law since 1965. Humans don’t necessarily grasp the power of exponential growth and as Moore’s law has continued to improve the processing capabilities of computers every two years, we’re now to this point where things are happening incredibly fast.

“What does that actually mean for our industry our way of life and the fact that we’re living in a world where self-driving cars are a reality and all that? It’s a really fascinating book to assess how we, as an industry, are going to change humankind and how we interact with each other and with technologies.”

John Underkoffler, CEO of Oblong named two. The first was titled Discovery-Driven Growth (by McGrath and MacMillan). He said: “It’s a really important set of ideas about working quickly on manageable, well-defined pieces of the problem and testing every step along the way so that if particularly production isn’t working, you stop. Literally after two weeks or after a month. You take those teams or that expertise and that energy and you redirect it toward something else. It’s about how to structure really important steps that will lead to growth.”

The second was Thinking Fast and Slow by Daniel Kahneman’s. He added “Daniel Kahneman’s got a Nobel Prize for economics when in fact he is a psychologist. It’s almost euphoric but by the time you finish it, you realise, wow, for the first time somebody’s actually written what’s kind of a user manual for a piece of the human mind. It exposes you to lots of the minds abilities and how we make decisions, but also to strategies for recognising the deficits that we have.”

Virender Aggarwal, CEO Ramco Systems also cited two books. “Maverick by Ricardo Semler and Pour Your Heart Into It: How Starbucks built a company one cup at a time by Howard Schultz. On the latter he commented: “I was kind of intrigued. How do you sell a $5 coffee that should cost you 50 cents or $1.” In one of the few duplications Glyn Heath, CEO of Centiq also named Maverick before revealing his latest read: “The Blockchain Revolution” by Don and Alex Tapscott.

Brian Murphy, CEO at Reliaquest reads prolifically, two books a month. He spoke about three. Shoe Dog by Phil Knight, The Tycoons by Charles Morris and My Life and Work by Henry Ford. With regards to Ford’s book he commented: “It’s a really difficult read. The English language has changed a lot in a hundred years . He also writes it like a mechanical engineer. It was fascinating to see how he was thinking through concepts that hadn’t yet been discovered. What I like about all of those stories is they were forced to find ways to train and develop workforces. They couldn’t just depend on someone else to do it for them, they had to create it.”

Rob Reid, CEO of Intacct (Now Sage Intacct) spoke about Stephen Covey’s book Seven Habits of Highly Successful Leaders, He said of it “ it was a foundation for me in allowing me to achieve the success along with my peers… All seven habits are intuitive. I don’t think anybody would say that doesn’t make any sense. … If you live those every day, I just don’t know how you can’t be successful in business.”

Ray Grainger, CEO Mavenlink talked about Sapiens: A Brief History of Humankind by Yuval Noah Harari. He added “Just a really, really profound book about what makes us human and how we think the way we do. How we create communities and businesses.”

Omri Kohl, CEO of Pyramid Analytics had just finished The Upstarts by Brad Stone. He said of it: “It’s the book about the creation of Uber and Airbnb. I think it’s pretty interesting for entrepreneurs to read the story and shows you persistence, dedication and devotion. The good, the bad and the ugly behind every very, very interesting headline in the newspaper of someone raising that amount of money, billions of dollars. There’s lots and lots of tears and blood before that happened.”

Chuck Berger, CEO of Kenandy selected one from a long list. It was the biography of Steve Jobs by Walter Isaacson. He commented: “It’s a great recounting of a company that has obviously gone on to be the most valuable company in the world. A reminder that it went through many fits and starts along the way, particularly through the 80s and 90s before it got on the track that it’s on today. You have to be able to deal with that adversity and stay with your vision to get to greatness.”

Jaspreet Singh, CEO of Druva spoke about Alex Ferguson’s book, Leading. He said: “It separates the coach from a player very, very well. He explains why he is he and Beckham was Beckham, why they were different and they both had their own place. Although he talks about football, it talks about how Beckham kept playing when he saw Ronaldo.”

“Just the day to day experience makes it beautiful and encouraging to see how hard he worked and why he had to distance himself from the pain. How he did it and how Beckham did it. It’s pretty interesting to watch it. It gives a lot of self-courage and self-importance about what it takes to do it and what you expect from a coach in your life.”

Vinay Joosery, CEO of SeveralNines spoke abou “Zero to One” by Peter Thiel. He said: “It basically tells you how to build startups and what are the issues you will find. Should you be contrarian in your manners in the market? How do different types of companies handle secrets and things like that. It also talks about the VC market, how it works, why so many people fail in raising money and why so many startups actually fail once they have raised money. I think it’s a very good combination of lots of theory combined with lots of real life experience.”

Steve Daly, CEO at Ivanti was reading Grit by Angela Duckworth. He said: “One of the reasons why I look at Teddy Roosevelt as a great inspiration is because of his ability to persevere and triumph over those challenges. It’s an awesome book. I think it’s a great way to explain what each of us intuitively knows.”

Gary Turner, MD of Xero UK spoke about The Cluetrain Manifesto by Rick Levine, Doc Searls, Chris Locke, and David Weinberger. He commented: “ It was a blueprint for the world of business that we’re in today, but about 15 or 16 years ago. I read it in 2000 and it was a huge wake-up call for me as we were just getting into the first generation of the web.

“It mapped out the potential that the web and social media and internet could have. I think it gave me a three-year, four-year head start on everybody else. I wouldn’t be doing what I’m doing today if wasn’t for that book, I can guarantee that.”

Sean Hoban, CEO of Kimble Applications spoke about how he was inspired by a book by Ben Horowitz, The Hard Thing About Hard Things. He added: “It was inspirational in the fact that it is just bloody tough. Knowing it’s tough, that you’ve just got to keep ploughing through and knocking down the various barriers that come up, was for me: ‘okay I know it’s hard but actually having someone else tell me it’s hard was (inspiring).’”

Eric Berridge, CEO of Bluewolf choose Money Ball  a baseball book by Michael Lewis and David & Goliath by Malcolm Gladwell. He added that is was his favourite book but commented: “If you ever think you’re Goliath you’re in trouble.”

Ulf Zetterberg, CEO Seal Software spoke about podcasts rather than books. He finds them easier to consume. He cited MIT Technology for both blogs and podcasts commenting “They tend to have a good perspective on technology and the applicability of technology. They don’t get too high on technology as the Holy Grail. “

Shakil Mohammad CEO of Spun Candy watches videos rather than read. His most memorable recently was Simon Sinek on Millennials in the workplace. He added: “It’s about how the new age generation wants to work very little, have a very short attention span, demand a lot more and then want to be rewarded really fast. I think there’s an element of truth to what he says but I don’t agree with it 100 percent.”