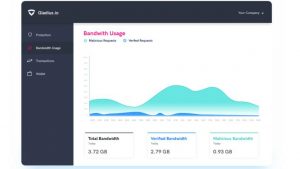 Gladius is a startup founded by Max Niebylski, Alex Godwin, and Marcelo McAndrew. It claims to offer decentralized Content Delivery Network (CDN) and DDoS protection via blockchain. The Gladius goal is to create a fully decentralized, peer to peer, serverless node network to connect bandwidth and storage pools to websites looking for DDoS protection and expedited content delivery.

Conceptually the idea is simple and elegant. It exploits a ‘light’ application installed on any computer with Linux, Windows or MacOS. This runs in the background when convenient for the user. Users (providers) ‘rent out’ unused bandwidth to earn Gladius tokens (GLA). Unlike Bitcoin mining, users don’t generate new tokens (Bitcoins). Instead they receive payment as part of their network bandwidth. In this way large nodes will be able to handle requests to validate website connections and block malicious activity.

According to the company’s Crowdsale page: “People who want to purchase web services will simply be able to create an account with Gladius, purchase Gladius Tokens through us, choose a website they wish to synchronize, set a base and max price for how much they are willing to spend, and then request and monitor all connections to their website.”

In December 2010, the FCC issued the “Open Internet Order”. This stated that internet service providers (ISPs) must be transparent and must not slow down or block content access for their users. This was the beginning of net neutrality legislation.

Arguing for net neutrality are those claiming that ISPs have gained too much power. One example offered was where T-Mobile, AT&T, and Verizon blocked ‘Google Wallets’ on their phones in order to promote their competing wallets. For the net neutrality proponents, regulation prevents ISPs from prioritizing certain content and traffic – thereby giving an equal viewing chance for all content.

Arguing against the regulation are those claiming that net neutrality will have a little effect on internet users after you take marketing techniques and strategies into consideration. Anti-net neutrality proponents also claim that:

DDoS attacks, or Distributed Denial of Service attacks, occur when the bandwidth of a certain system, usually one or more servers, are flooded by multiple systems. In other words, when unwanted traffic is occupying the access to a site, denying actual visitors from connecting to the site, like a deliberate web traffic jam.

These attacks happen for various reasons, from entertainment to sabotage. The attacker simply enjoys the chaos they cause to market competition — in hopes the users will switch to their service, demanding a ransom to stop the attack or using it as a distraction to launch other attacks. In 2016 alone, DDoS attacks added an estimated $150 billion cost to enterprises.

Gladius and CDN is an answer

CDN is a solution for faster internet communication for content distribution based on geographical proximity to servers and data centres. Today, CDNs are owned by ISPs, by content providers or by third parties such as Incapsula or Akamai. The CDN market’s worth is expected to grow to US$23B by 2021 with enterprises spending near $5,000 monthly for DDoS protection (even if they never suffer an attack).

In the Gladius whitepaper, it describes: “Gladius works similarly to traditional CDN and DDoS protection companies by creating a custom proxy which sits between a website’s server and the open internet. However, unlike traditional networks, the layer that sits between the website and the internet is made up of small clients that split up the traffic verification and cached files/content into thousands of tiny parts that are able to communicate with each other in fractions of seconds.”

In effect, even though each and every node has a vital role in making up and building the system, any instance where a node goes down will not have an effect at all to the loss of protection or content delivery over the blockchain. Large pools with hundreds, if not thousands, of nodes will then be able to handle a continuous stream of requests to validate website connections and block malicious activity. Every website request a user validates will earn them Gladius Tokens. The database of pools will exist on a blockchain with additions appended by miners. Joining a pool is initiated by a node with an Ethereum smart contract.

In the Gladius solution, where clients provide and use the service, the costs and the rewards becomes attractive for users. They can even calculate in advance and plan their earnings based on their upload limitations and daily uptime. Users will be part of localized verification pools. In turn, users can sell these tokens back to websites to create an economic cycle that promotes the growth of the Gladius Network. Thus users will be able to choose networks which best fit the matrix of ‘location, price and availability’.

Net neutrality is a fiercely disputed topic, with much hot air and more than a leavening of bias and fixed positions. The arguments are complex and often abstract. Yet the consequences will be felt by almost everybody. (If you think this sounds like Brexit or the Tax Cuts and Jobs Act of 2017 you will not be far off).

The attraction of the Gladius approach, if proven, occurs because it is a decentralized solution for maintaining an open internet. The result would be – net neutrality continues. This would be irrespective of the December 2017 FCC vote.

In effect, the influence and power of ISPs would gradually decrease while securing fast accessible connections for users. It sounds appealing, if it delivery occurs.