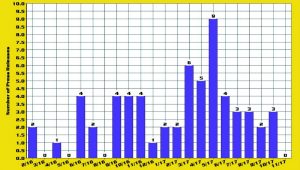 In 2016 IBM’s blockchain interest showed its first signs of ‘public life’. Through 2106 the number of announcements (by press release) built, with the odd quiet month. In 2017 the tempo built, until June 2017 when it slowed dramatically, before falling away to nothing in November.

This could be natural. Worthy material to announce does not appear on some convenient schedule. Yet the drop from May to November is substantial. Has IBM’s interest peaked? Should customers take note?

The following announcements occurred in the second half of 2017:

The following announcements occurred in the first half of 2017:

The following announcements occurred in 2016:

As Bitcoin passes US$10K it would seem strange if IBM’s interest in blockchain was to diminish. Yet, prima facie, the lack of relevant announcements in the second half of 2017 would appear to indicate some form of change within IBM – despite all the efforts of IBM Fellow Dr. C. Mohan traipsing the world (he has been seen in China, India, Europe and N America this year) to talk about blockchains and databases.

The jury must be out. But, if IBM is to maintain its position as a leader in blockchain, it will need to rekindle belief.