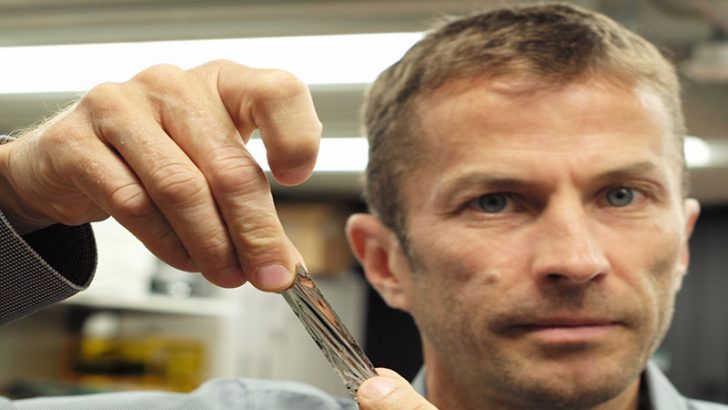 Tape is the storage media that refuses to die. Most storage vendors got out of the tape market years ago citing speed, capacity and storage problems as their reason. They then moved into much more expensive multi-tier disk-based systems. Despite this, tape storage still persists in environments where long term storage is required. It also continues to be seen as a more reliable and lower cost alternative to racks of disks waiting to be powered up.

IBM and Sony have continued to advance the tape storage market. The two companies have now announced a new record for tape storage of 201GB/in2 (gigabits per square inch). It means that a single tape is capable of holding up to 330 terabytes of uncompressed data. That is the equivalent of over 330 million books. It is also enough to store 6 months of data generated by the Large Hadron Collider based at CERN.

Announcing the new breakthrough IBM Fellow Evangelos Eleftheriou said: “Tape has traditionally been used for video archives, back-up files, replicas for disaster recovery and retention of information on premise, but the industry is also expanding to off-premise applications in the cloud. While sputtered tape is expected to cost a little more to manufacture than current commercial tape that uses Barium ferrite (BaFe), the potential for very high capacity will make the cost per TB very attractive, making this technology practical for cold storage in the cloud.”

Who is using tape storage?

Large enterprises, governments, hosting providers and cloud computing providers all use tape storage. Amazon and Google have both admitted that they are still using tape in their backup processes to manage the amount of data they store.

Governments are also driving an increase in demand for tape storage. Their demand for more and more data to be retained for anti-terror and intelligence agency use has seen new tape systems being used to transfer data between telcos and government agencies.

The continued growth of data is also helping drive tape systems. Organisations no longer carry out proper archiving of data. Instead they create generations of backups that need to be stored cost effectively. Enter tape as the low cost solution.

To set this latest record IBM and Sony have moved from the existing technique of creating tape using a Barium ferrite (BaFe) coating. BaFe was first shown in 2007 and has seen tape storage density move from around 7Gb/in2 to 123Gb/in2 in 2015.

The existing technique of creating tape using BeFe has now reached its limit. To set this latest storage record of 201Gb/in2, Sony has developed a new way of creating the tape. It still uses BeFe but it is now added to the surface of the tape in the same way as it is added to integrated circuits. 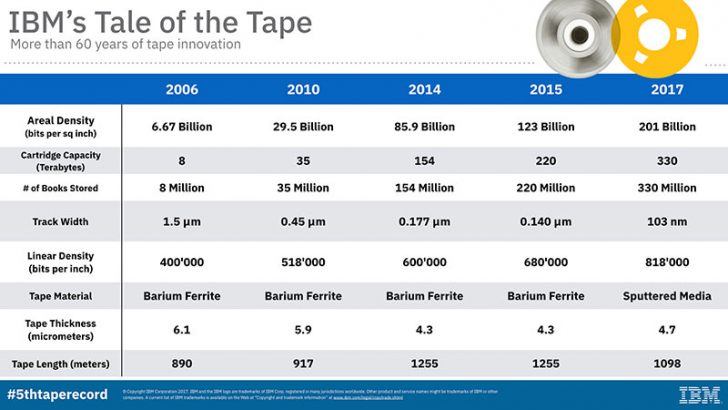 What is important here is whether this change of materials can continue the capacity growth of tape. IBM and Sony believe it can and have been talking of as much as a doubling of capacity every two years. That is ahead of the current growth curve. In 2014 IBM and Sony announced 85.9Gb/in2. By 2015 it had pushed that out to 123Gb/in2. That’s a growth rate of around 69%.

This latest announcement is just a 61% increase on that 2015 number, hardly the doubling of capacity that they are targeting. However, this is the first generation of sputtered tape and has required other innovation from IBM to utilise it. It could be that the next generation will show a greater jump as the technology is better understood.

IBM has listed three more technologies required to reach 201Gb/in2. They are:

As this is the first generation of a new tape technology there will inevitably be an increase in costs to customers. They will need to change their tape devices and this will raise questions about whether IBM will make new tape drives backwardly compatible with the technologies they current use. If it doesn’t, it is likely to see a slower uptake of the new technology than IBM would like.

No technology completely dies and goes away. Tape is a good example. It’s speed compared to hard drives is irrelevant for the operations it is used for. This is about long term storage and tape has proven it is better at that than stacking up hard drives. It will be interesting to see how long it takes for IBM to announce the first generation of tape drives to use this new tape technology.

It should also be remembered that this isn’t just about IBM and Sony. Fujitsu is also a major player in the tape space. It will inevitably respond to this announcement in the next few months with its own storage record.

Tape might not be as exciting as other areas of technology but it is profitable and there is a lot of research still going on.