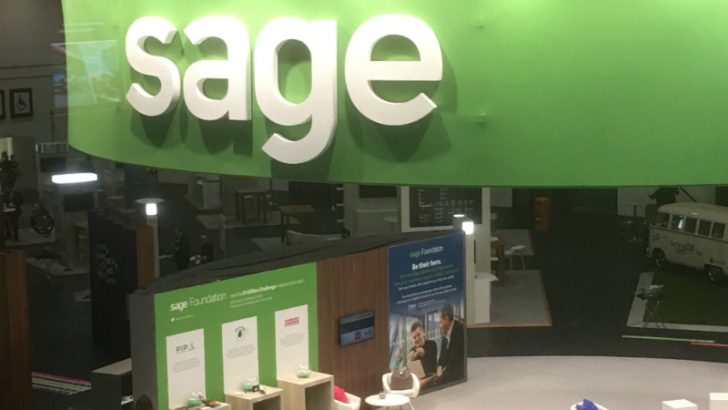 Sage announced another strong set of results at the half year mark. Stephen Kelly, CEO inferred that the company would exceed its full year revenue guidance. On the back on the announcement the shares surged nearly 22 points to 705.48GBX, around 3.22% increase. (Source Yahoo finance).

When comparing year on year the figures are heading in the right direction. Total revenue increased to £840 million (H1 2017), up 22.7% on £684m (H1 2016). Cloud revenues grew by 30%, although this is slightly down on the 34% growth in H1 2016. That was one of the few downsides in the results and a trend that Sage will want to reverse. Their rivals are accelerating their cloud growth. This might have been a result of the aggressive advertising campaign by Quickbooks.

One of the reasons for the surge may be due to the decision about the US payments division. At the end of the first quarter Sage confirmed that it was reviewing all their payments operation. That included its US, South Africa and the UK operations. In the end the company has have ring fenced the US division and put it up for sale. However it will retain the UK and South Africa operations as they are integrated into Sage’s strategic products in those countries.

This draws a line under the decision and now it is a matter of what price it can achieve. That the decision was reached quickly for all countries is good. Had the review been draw out it would have been seen as indecisive. It shows that Kelly is not afraid of making the decisive decisions when required.

The tankers are turning

Kelly is delivering change at Sage. Certainly at Sage Summit London there was almost the feel of a startup at times. The internal staff are invigorated by the new Sage and they are certainly engaged in the migration to cloud. The biggest challenge is bringing the customers and partners with them. The messaging is softer than both Quickbooks and Xero, though the latter is operating in a green field market with no legacy installations.

Importantly for the internal business, G&A costs are down with the proportion to revenue decreased from 19.7% to 15.2%. The only detail on those savings was that in the first half of the financial year Sage reduced headcount costs by £21 million and other costs by £7 million. The exceptional costs relating to those savings was £17 million.

The news was especially positive in the US. Kelly presenting at the Sage Summit Atlanta but not in London shows the importance of that market to Sage. Sage X3 performed will, growing 25% in the quarter, while Sage 50c and Sage 200c returned triple digit growth. As both products are fairly new it will be interesting to see if that is maintained.

More importantly one of the key metrics for cloud software companies also improved. Renewals rose from 82% to 84% year on year. There is still room for improvement and it will be interesting to see what the reasons behind that low percentage are. Sage will need to improve that further as time passes. One hopes that the growth they are forecasting is not purely net new.

These are strong results from Sage and Kelly was clearly happy with them. He commented: “These are positive results in line with market expectations and there are clear signs our strategy is working, with seven of our nine largest geographies, that collectively generate 95% of our revenues, now delivering growth in excess of our revenue guidance. The investments in our go-to-market functions are starting to bear fruit: our cloud-enabled products are growing strongly and we have made progress in our new customer acquisition strategy, driving momentum in Q2 that will continue throughout H2 and as we exit FY17.

“Our updated payments and banking strategy and the acquisition of Fairsail, show our commitment to the golden triangle of accounting, people & payroll and payments & banking, reinforced by our cloud capabilities. We are focused on Sage continuing to invest in growth, predominantly through new customer acquisition with cloud-products, and supported by bolt-on acquisitions that accelerate the strategy.”

With the acquisition of Compass and Fairsail recently there are further opportunities for growth. The rebranding of Fairsail to Sage People may also help Sage penetrate the market with a modern HRM software application. It will take time for the Sage sales teams to get trained but the their impact should be seen by the end of the year.